In this course, Professor Kevin Ruane (Canterbury Christ Church University) discusses the Cold War in Asia. We begin by thinking about the atomic bombing of Japan in August 1945. Why did President Truman choose to use a weapon that he knew would lead to such enormous loss of civilian lives? In the second module, we think about the evolution of US strategy in Asia in the period 1947-50, focusing in particular on George Kennan’s policy of containment and the more wide-ranging, proactive, militarised principles of NSC 68. In the third and fourth modules, we think about US strategy in Vietnam – first under President John F. Kennedy, and then under his successor Lyndon B. Johnson. Why did Johnson to escalate the war in Vietnam? Was this what Kennedy would have done had his term in office not been prematurely ended by the assassin’s bullet? In the fifth module, we think more broadly about Western policy in Asia, focusing in particular on the extent to which the Cold War in Asia was independent from the Cold War in Europe, and the importance of Japan’s conquests in the Second World War in giving rise to anti-colonial, nationalist, Communist sentiment in the East. Finally, in the sixth module, we think about the French War in Indochina (1946-54), focusing in particular on its relation to the Vietnam War (1955-75) as well as its influential depiction in Graham Greene’s 1955 novel, The Quiet American.

Kevin Ruane is a Professor of Modern History at Canterbury Christ Church University and a By-Fellow of Churchill College, Cambridge. He specialises in twentieth century international history, in particular Anglo-American relations, the Cold War, Nuclear History, and the Vietnam war. His recent publications include Churchill and the Bomb in War and Cold War (Bloomsbury, 2016), The Vietnam Wars (Manchester, 2000) and War and Revolution in Vietnam, 1930-75 (Routledge, 1998).

1. The Role of the Atomic Bomb

3. JFK and the Vietnam War

4. Lyndon Johnson and the Vietnam War

6. The French War in Vietnam in Fact and Fiction 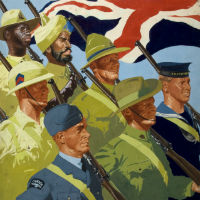