In this module, we think about some of Catullus’ shorter poems, focusing in particular on: (i) the artistry of poem 85, including the balancing of phrases, the movement from active to passive verbs from the first to the second line, and the lack of any direct objects; (ii) the artistry of poem 70, including the repetition of the word ‘dicit’ (she said), the use of the word ‘sed’ (but), and the slight shift from ‘mea mulier’ (my woman) to simply ‘mulier’ (a woman) from the first to the second couplet; (iii) the epigrammatic nature of part of Ariadne’s speech in poem 64, including (once again) the delicate balancing of phrases, the use of the word ‘sed’ (but) to provide a turning-point, and the repetition of words in different senses; and (iv) the sense of balance in poem 62, which presents an ‘amoebean’ exchange between a group of girls on the one hand, and a group of boys on the other. 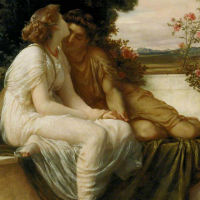