In this course, Professor Judy Barringer (University of Edinburgh) explores Greek art, focusing in particular on vase-painting and sculpture from the seventh to the early fifth century BC. We begin by thinking about black-figure pottery, focusing in particular on the François Vase, Exekias' Vatican Amphora, and the Dionysus Cup. After that, we turn to red-figure pottery and the works of the Andokides Painter, Euphronios, Euthymides, and the Berlin Painter. In the third and fourth modules, we consider free-standing sculpture, looking first at male figures (kouroi) and then at female figures (korai), including (in the third module) the New York Kouros, Sounion Kouros and Anavysos Kouros and (in the fourth) the Phrasikleia Kore and the Korai from the Athenian Acropolis. Finally, in the fifth module, we think about the development of architectural sculpture in the sixth century, focusing in particular on the sculptures from the Siphnian Treasury at Delphi as well as those from the Temple of Zeus at Olympia.

Judy Barringer is Professor of Greek Art and Archaeology at the University of Edinburgh. Her scholarly work centres on the archaeology, art, and culture of Greece, particularly the intersection between art, myth, and religion, from the Archaic through Hellenistic periods. More specifically, she is interested in why images, particularly sculpture and vase painting, appear as they do and how they acquire meaning for ancient patrons and viewers from their physical and social contexts. Her recent publications include The Hunt in Ancient Greece (2001), Art, Myth, and Ritual in Classical Greece, and The Art and Archaeology of Ancient Greece (2014). 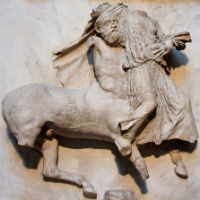