Dr Benjamin Pohl joined the University of Bristol in 2015 as a Lecturer in Medieval History c.1000-1400.

Benjamin received his PhD from the University of Bamberg. Prior to his appointment at Bristol, he held research fellowships at the Universities of Bamberg, Cambridge and Ghent. He is also a fellow of the Humboldt Foundation, as well as a research associate of Emmanuel College, Cambridge. His main research interests are in Norman and Anglo-Norman history, with a special focus on manuscript studies, book history, historical writing and cultural memory. Benjamin has published widely on medieval Normandy and England, including numerous articles and his monograph Dudo of Saint-Quentin’s Historia Normannorum: Tradition, Innovation and Memory (Boydell/York Medieval Press, 2015). He is currently preparing his new monograph on Abbot-historians in medieval Europe (c.1000-1200): Monastic leadership between codex and career. 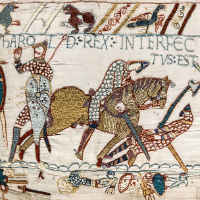