John Marenbon is a Fellow of the British Academy, Senior Research Fellow of Trinity College, and Honorary Professor of Medieval Philosophy, as well as Visiting Professor at the Philosophy Department of Peking University. His interests cover the whole breadth of philosophy in the Long Middle Ages (c. 200 – c. 1700), in the Latin and Greek Christian, Islamic and Jewish traditions. He has written both general books (especially Medieval Philosophy: an historical and philosophical introduction (2007) and (as editor) the Oxford Handbook of Medieval Philosophy (2012), as well as more specialized studies of Boethius and Abelard. His most recent book is Pagans and Philosophers. The Problem of Paganism from Augustine to Leibniz (2015). You can find a CV, List of Publications and copies of many of his recent articles at Academia.edu

He is is one of the leaders of the project 'Immateriality, Thinking and the Self in the Philosophy of the Long Middle Ages', a joint project of the Faculty of Philosophy, University of Cambridge and the Department of Philosophy, Peking University, financed by the British Academy through an International Partnership and Mobility Grant, March 2015 – February 2016. 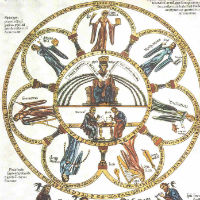