Sample Lecture – Mexico and the War on Drugs, 1492-Present

Dr Benjamin Smith is currently Associate Professor of Latin American History at the University of Warwick, where he teaches several courses on Latin America, 20th-Century Mexico and the Mexican Drug Trade.

As a historian of nineteenth and twentieth-century grassroots politics, he has done most of his research in the archives, villages, churches, and markets of the predominantly indigenous state of Oaxaca. His first book, Pistoleros and Popular Movements: The Politics of State Formation in Postrevolutionary Oaxaca attempted to capture the diversity of post-revolutionary politics and looked at regional bosses, female-led social movements, violence, and agrarian reform from the 1920s through to the 1950s. He has also co-edited a collection of essays on the subject, entitled Dictablanda: Politics, Work, and Culture in Mexico, 1938-1968, which was published in early 2014. 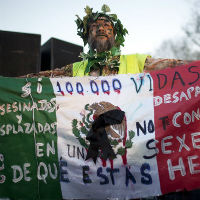 Mexico and the War on Drugs, 1492-Present