In this course, Professor Marion Turner (University of Oxford) explores The Wife of Bath's Prologue and Tale, part of Chaucer's Canterbury Tales. We begin by thinking about the portrait of the Wife of Bath in the General Prologue of the Canterbury Tales, focusing in particular on the extent to which the Wife of Bath resembles a real historical woman, as well as on some of the literary tropes that Chaucer has drawn on to flesh out her character. After that, in the second and third modules, we turn to the Prologue to the Wife of Bath's Tale, and think about whether it should be read as an anti-feminist or pro-feminist text. In the fourth module, we think about the Wife of Bath's Tale itself, and consider the extent to which Chaucer has reworked the traditional genre of Romance. Finally, in the fifth module, we think about the ethical interests of the Wife of Bath's Tale, focusing in particular on the role of women in delivering the ethical message of the Tale, and on the Loathly Lady's famous account of 'gentilesse' as a characteristic that is not inherited but earned.

Marion Turner is Associate Professor of English at Jesus College, University of Oxford. She is the author of a ground-breaking biography of Chaucer: Chaucer: A European Life (Princeton, 2019). This biography focuses on Chaucer as an international figure, exploring his travels, his multicultural influences, his multilingual identity, and the global aspects of medieval London.

Her other books include Chaucerian Conflict (Oxford, 2007) and, as editor, A Handbook of Middle English Studies (Wiley-Blackwell, 2013), and she has published many articles on Chaucer and other aspects of late medieval literature. Marion has received research funding from the British Academy, the Leverhulme Trust, and the Wellcome Trust. She often speaks in the media, including Radio 4, BBC1, Channel 4, and ITV. She has a particular interest in outreach, taking part in Chaucer Days at the Ashmolean Museum and the Weston Library, aimed at sixth form students of Chaucer, and often speaking at schools and colleges. 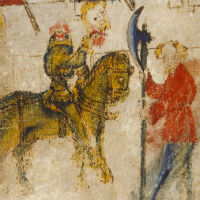